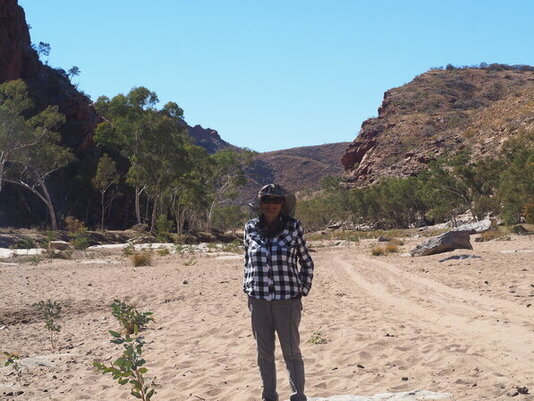 A gem-fossicking discovery echoes through time and leads to a dangerous journey through the red dust outback. A gripping mystery from Australian author Annie Seaton.
Gemma Hayden has returned to her hometown of Alice Springs for a new job as a primary school teacher. It's been six years since her family broke apart following the disappearance of her twin brother. And the scars still run deep.
Hard on the heels of her homecoming, Saul Pearce, the man she once loved, is reposted from Parks and Wildlife in Darwin back to Alice. When an old car wreck is uncovered, washed down the river to Ruby Gap, Saul investigates only to find that the wreck belonged to Ethan, Gemma's twin - and there's a coded note for her in the glove box.
Joining forces, they trek through the rugged outback, piecing together clues that not only bring them to the attention of a criminal organisation but lead them to uncover an even older puzzle ... One now lost to the history books.
With targets on their backs, will they unearth the truth in time?

PRAISE FOR ANNIE SEATON's OSPREY REEF:
'Emotional, mysterious, and gripping from page one, Seaton transports you to two different timelines in one of the greatest Australian settings ... The Great Barrier Reef.' - Better Reading
'With an insightful glimpse into the environmental issues at the heart of one of our nation's most treasured locations, combined with some fascinating history, compelling family relations and an equivocal adventure mystery, Osprey Reef has it all.' - Mrs B's Book Reviews
​

THE RESEARCH
Dear Readers
As soon as we arrived at Ruby Gap, I knew I would write a story about this remote and rugged area of outstanding natural beauty – and that feeling became my new novel, East of Alice.
Three years ago, we set off on a trip to the Red Centre to explore the better-known tourist destinations such as Coober Pedy, Uluru, Kings Canyon and Alice Springs. Always on the lookout for a story, we often don’t map out an exact plan for a trip as we tend to stumble upon enticing landscapes in our off-road caravan that create fascinating detours. But this time was a bit different, several years earlier we’d met a fellow traveller who had mentioned a place east of Alice Springs called Ruby Gap, and I had researched the history of this fascinating location before we left home. In March 1886, explorer, David Lindsay, was surveying this remote area for the South Australian Government. While digging for water in the sandy bed of the Hale River, Lindsay discovered what he thought were rubies. The ensuing events began to form the basis in my mind for a contemporary mystery.
To get there, after leaving the Ross Highway we turned onto the Binns Track—a rocky corrugated road that took us through the abandoned site of the historic town of Arltunga, the first official town of Central Australia. This small shanty town formed in the desert as miners flocked to the site to seek their fortune when gold was discovered in 1887. The ruby discovery site further to the east at Hale River was abandoned when the gems were assayed in London and the miners were told they were garnets. Many of the miners moved to Arltunga to follow the gold.
We made our way to our base camp and dropped off our caravan at the Old Ambalindum Homestead. Settled in 1906, the homestead was the home of the assayer at Arltunga Government Works.
The next day we then had to venture sixty kilometres along a winding four-wheel drive track through the spectacular scenery of the East McDonnell Range to the Ruby Gap Nature Park. Crossing many wide, dry creek beds we drove through rock-strewn, tussocky gullies as we approached the Hale River. Gnarled ghost gums lined the banks of each creek, the white bark contrasting against the rich red of the quartzite cliffs and the deep blue of the sky above.
Spellbound by the red sparkling riverbed where you could scoop up handfuls of gravel dotted with garnets; we spent the day exploring. The silence was broken only by the wind and the occasional cry of a bird wheeling in the clear sky.
Surrounded by this spectacular landscape and knowing its mysterious history, I couldn’t help imagining what else could be hidden out here… I hope you enjoy reading my story about Ruby Gap. Enjoy the photos below.
Annie Seaton