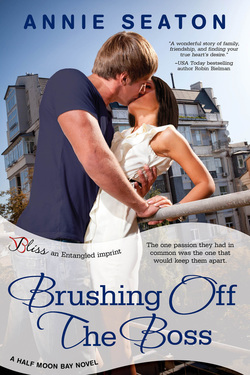 The one passion they had in common was the one that would keep them apart.


Artist Sienna Sacchi is about to have everything she’s ever dreamed of, when sexy playboy Jack Montgomery comes strolling back into her life as the owner of her gallery. Her plan to buy it herself ruined, she refuses to let him interfere with the most important thing—her debut exhibition. But Jack’s not just taking over her workplace, he’s also intruding on her art studio, her home, and maybe even her heart.


Jack Montgomery has few rules for his carefree life, but never mixing business with pleasure is one he is determined to keep. He’d planned on finally satisfying the tension between him and Sienna, but discovering he’s her boss puts an immediate end to that. Unfortunately, being forced to share a tiny apartment with the gorgeous, tempting sculptor is pushing Jack to his limits. One brush with desire could ruin everything they’ve worked for.